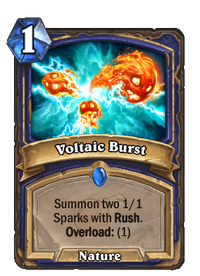 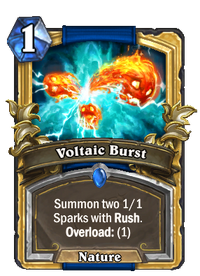 For the boss card in Book of Heroes, see Voltaic Burst (boss).

Voltaic Burst is a rare shaman spell card, from The Boomsday Project set.

Voltaic Burst can be obtained through The Boomsday Project card packs, or through crafting. 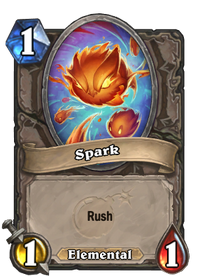 On its own, Voltaic Burst is a flexible but somewhat costly removal or board flood. The main strength of this spell is combining the minions with attack buffs, such as Raid Leader or Flametongue Totem, giving the Sparks far more value. The Overload also works well with cards like Thunderhead, Likkim, and Unbound Elemental, providing a cheap way to trigger their effects which can be cast at pretty much any time.