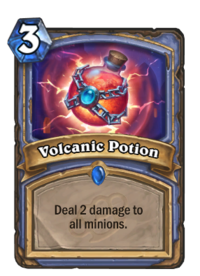 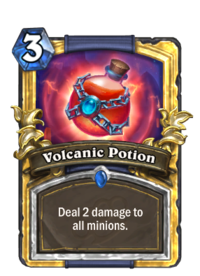 Deal 2 damage to all minions.

Volcanic Potion is an rare mage spell card, from the Mean Streets of Gadgetzan set.

Volcanic Potion can be obtained through Mean Streets of Gadgetzan card packs, or through crafting.

This card is a good counter to aggro decks, often dealing enough damage to clear the board early game. While more powerful than Arcane Explosion, it has the downside of damaging your own board - a rare trait for a Mage AoE spell.