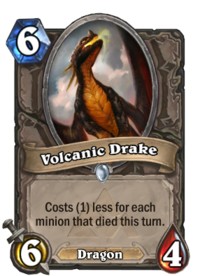 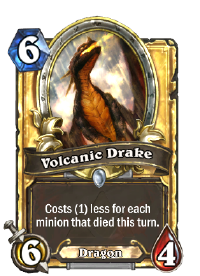 Costs (1) less for each minion that died this turn.

Volcanic Drakes breathe lava instead of fire. The antacid vendor at Thorium Point does a brisk business with them.

Volcanic Drake is a common neutral minion card, from the Blackrock Mountain set.

As a Wild format card, both regular and golden versions of Volcanic Drake can also be crafted for the following amounts:

Ideally you want to make this card cost 4 or less mana to get value. You can either trade minions or cast AoE like Flamestrike in order to achieve this. Keep in mind that its stat distribution makes it vulnerable to your opponent's 4-damage options. Since this is a 6-drop you can use Recombobulator to create another 6-drop minion. Recombobulator will use the Drake's base mana cost of 6, even if it was played for less.

This minion has great potential as part of, or even when against a Paladin deck. Their hero power Reinforce and Muster for Battle will create a multitude of bodies by themselves, which can make playing Volcanic Drake a cheap and devastating swing in board control.

In a given dragonflight, not all dragonkin are equally powerful. Drakes are younger dragons, and Nefarian keeps a bunch of these around to do his bidding. They do it all, including acting as guards, enforcers, mounts for favored allies (lookin’ at you Rend), cook, clean, do chores around the lair, and are really great at disposing of excess adventurers.

They have a weakness for snacks, so if you have some tasty corpses handy, a drake will be your best friend forever.[1]

Drakes are dragons that are still relatively young in comparison to their ancient brethren. Drakes are almost always flying while moving, while nether drakes tend to walk. Fully grown dragons are bigger and typically walk while moving. Drakes can be found throughout Azeroth, but are especially prevalent in some areas, such as the Burning Steppes, the Swamp of Sorrows, Winterspring, and in many dungeons. 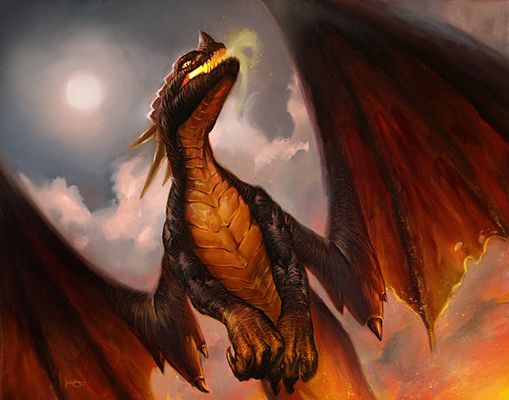