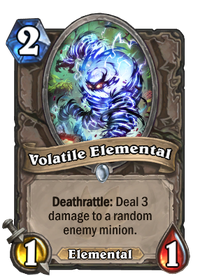 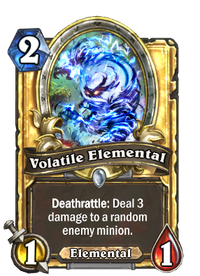 Currently in an anger management class with Raging Worgen, Grommash Hellscream, and The Angry Chicken. It isn't helping.

Volatile Elemental is a neutral common minion card, from the Journey to Un'Goro set.

Volatile Elemental can be obtained through Journey to Un'Goro card packs, or through crafting.

While this minion is severely under-statted, its Deathrattle is very powerful. It can easily trade up, and does well against several small minions. It's important to remember that its effect only targets minions. This reduces the randomness by a lot, but also means it can't be used aggressively.

Mages can effectively use this card and their Hero Power to manually activate its Deathrattle effect early, which can be useful for removing Taunt minions or other targets from the board when other removal options are not available.

This card can be used to interrupt your opponent's flow of cards onto the board, by making them hesitant to play a 3 or 4 Health minion due to its ability to trade up effectively. However, it is very vulnerable to being removed via a Mage's Fireblast or other pings.

It also has Elemental synergy.

Attack
Don't mess with me!