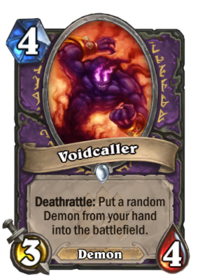 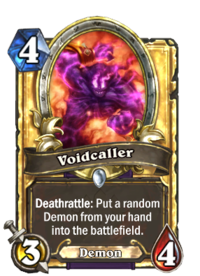 Deathrattle: Put a random Demon from your hand into the battlefield.

Voidcaller is a common warlock minion card, from the Naxxramas set.

Two copies of regular Voidcaller are obtained by completing the warlock Class Challenge in Curse of Naxxramas.

As a Wild format card, both regular and golden versions of Voidcaller can also be crafted for the following amounts:

You can play cards like Dark Pact, Power Overwhelming, Sacrificial Pact, Shadowflame, Void Terror, Spiritsinger Umbra or Carnivorous Cube to trigger the effect early on your own turn.

Even if the player has no other demons in their hand (or their deck), the Voidcaller can be a useful 4-drop, due to its tendency to encourage the opponent to use Silences or Transforms to remove its Deathrattle. Since the opponent usually has no way of knowing what the warlock has in their hand, this can make it a reasonable Arena pick even with no other demons in the deck, acting to waste the opponent's valuable neutralisation spells.

This card matches well with Voidlord, making a huge Taunt minion in turn 4. Other demons that are advantageous to cheat out early are Mal'ganis and Fel Lord Betrug. In some decks like Cubelock and Control Warlock, Sense Demons is also used for higher chance of drawing this combo in early game.

Summon
From the void I come.

Attack
To the void. 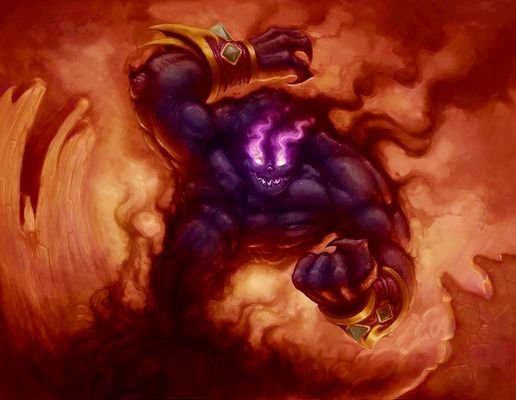