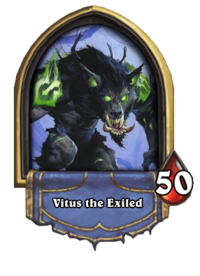 Vitus the Exiled is a boss that can be encountered during the Monster Hunt.

Vitus is a difficult boss if your deck is light on cheap AoE removal. Volcanic Potion, Fan of Knives and Unleash the Hounds are all useful here. The first few turns are going to be hard but if you can keep his minions low and not let his card draw minions get a lot of value then it is an easy match. Focus purely on defense and weather the onslaught of tokens and cheap minions. Be very wary of cards like Bloodlust and Cold Blood. If you have Caltrops, you may have handicapped yourself. On already buffed minions then can easily overwhelm you and end your Monster Hunt.

Your cannons won't save you here if you are too slow. The only way you are going to make is if your cannons deal more than 1 damage or more. Also be conservative in your cannons as the boss has rage minions.

Companionship and your other class cards will help you win. Survive the onslaught and gain the board. Bad draw will result in a lose, so Companionship is a must need.

Vitus is unfair, so I hope you build a deck with an idea in mind. The fact of the matter is that his strategy is to overwhelm you, so you must survive his punishment, only when you gain the upper hand can you truly win.

Having a Jade deck will not get you far if you are slow. For this fight, you may need either Glyph of Warding or Crystal Gem if you want to stand a chance.

Clear his board when possible. Utilize your hero power to get Savage Roar, Bloodlust or other powerful burst spells to assist.

Hagatcha The Witch
One of your own, cast aside! Within my woods he finds a home...

Vitus the Exiled
Still you try to hunt me?

Vitus the Exiled
Do you smell that? Fear.

Pitiful.
Weakling.
You are nothing.

Succumb to your rage!

Vitus the Exiled
Only the strongest survive!

Virus appears to be a Gilnean who succumbed to the Worgen Curse and its rage. Therefore, Gilneas had to banish him from their land.