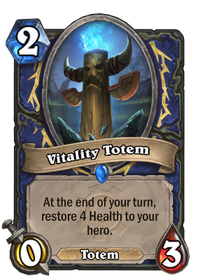 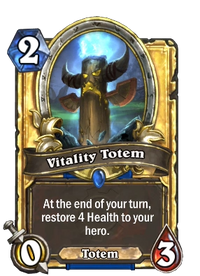 At the end of your turn, restore 4 Health to your hero.

You can usually find these at the totemist's market on Saturdays.

Vitality Totem is a rare shaman minion card, from the Goblins vs Gnomes set.

Vitality Totem can be obtained through Goblins vs Gnomes card packs, or through crafting.

Since its triggered effect does not heal minions, Vitality Totem depends on attacking with the hero using weapons or Rockbiter Weapon with maximum efficiency. Doomhammer is best; its flexible Windfury can clear waves of minions as long as this totem keeps feeding your hero Health.

Guaranteed to activate at least once before it is removed, the Totem can also be a more straightforward source of healing, especially if the player has already taken substantial amounts of damage before it is played. Even without incurring further damage, if the player can shield the Totem from harm for a few turns, it can quickly restore many times its cost in Health. This makes it effective as a soft taunt. The Totem is a far weaker play if the shaman is at or near full Health, as it will be easy for the opponent to ignore it until they are ready to deal with it. 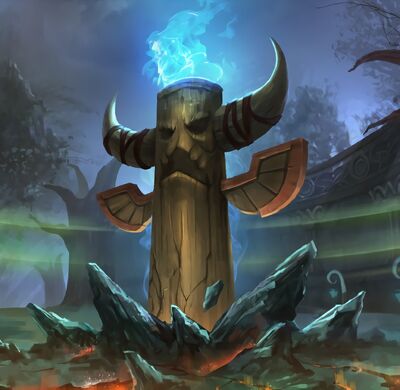