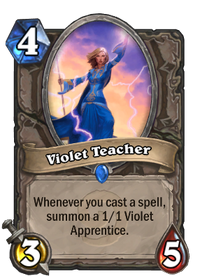 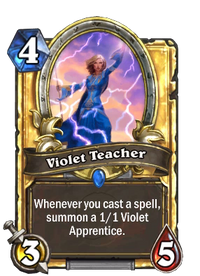 Whenever you cast a spell, summon a 1/1 Violet Apprentice.

If you don't pay attention, you may be turned into a pig. And then you get your name on the board.

Violet Teacher is a rare neutral minion card, from the Classic set. It summons a 1/1 Violet Apprentice each time the controlling player plays a spell. 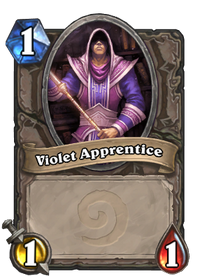 This card summons a 1/1 Violet Apprentice upon each spell cast. Therefore, these can be used to quickly swarm the field and overwhelm your opponent by casting multiple spells while Violet Teacher is in play.

Note that the Apprentice is summoned before the spell takes effect, making the Violet Teacher particularly potent with spells that buff all minions (Power of the Wild), in which case a 2/2 is summoned instead of a 1/1. On the other hand, if a Wild Pyromancer is on your side of the battlefield when a non-Power of the Wild spell is cast, the Violet Apprentice will be destroyed when the Pyromancer's effect triggers.

As with all other minions with triggered effects triggering on casting of spells, a spell countered by Counterspell will still trigger the Teacher's effect.

This card should be placed in order to set up some defense as you strike and dish out additional damage on your next turn.