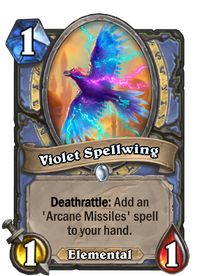 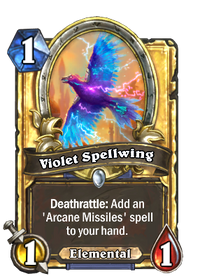 Deathrattle: Add an 'Arcane Missiles' spell to your hand.

A bird in the hand is worth three missiles in the grave.

Violet Spellwing is a common mage minion card, from the Descent of Dragons set.

Violet Spellwing can be obtained through Descent of Dragons card packs, through crafting, or as an Arena reward. 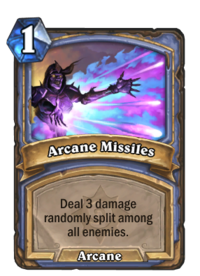 Since Violet Spellwing reliably creates a cheap spell, it's perfect for cycling through your deck with cards like Gadgetzan Auctioneer and Stargazer Luna, and activating Chenvaala, Mana Cyclone, or Dune Sculptor. It also works well with Elemental Allies as a cheap Elemental that can easily be summoned at any point.

Outside of synergies, Violet Spellwing compares unfavourably to Babbling Book since it generates the spell far slower and doesn't have any highroll potential.

The Violet Spellwing is a flying mount that was rewarded to players who completed the Blood of a Titan quest, available from defeating Argus the Unmaker on Heroic or Mythic difficulty during the Legion expansion. Its mount description refers to it as a gift from the Council of Six, the Kirin Tor's ruling conclave.