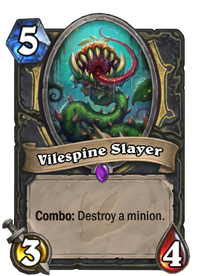 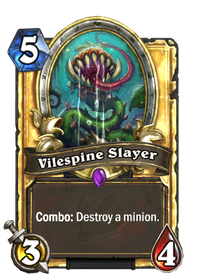 Vilespine Slayer is an epic rogue minion card, from the Journey to Un'Goro set.

Vilespine Slayer can be obtained through Journey to Un'Goro card packs, or through crafting.

This minion's poor stats for its cost and requirement of Combo are counterbalanced by its powerful effect similar to Assassinate, leaving an average-sized body on the board in addition to removing an unwanted minion from the field. This can grant huge tempo swings in the owner's favor, and as such, Vilespine Slayer is considered a very good card for any Rogue deck.

Vilespine Slayer makes a very strong combination with Sonya Shadowdancer, allowing you to remove any minion for 1 mana.