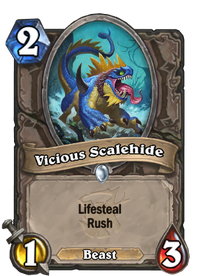 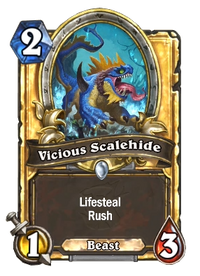 They make wonderful pets if you're not allergic to blood loss.

Vicious Scalehide is an common neutral minion card, from the The Witchwood set.

Vicious Scalehide can be obtained through The Witchwood card packs, or through crafting.

Vicious Scalehide packs two very useful combination of keywords, Lifesteal and Rush, which lets it trade with minions while restoring health to your hero. However, while its weak stats makes it less useful as a standalone card, it becomes considerably better when buffed, as any attack buffs also increase the heal. Paladins are an obvious choice with their plethora of buffs, as well as slower Hunters that can also utilize the beast synergies.

It is extraordinarily powerful in Quest Rogue for generating large amounts of healing once the quest is complete. While the opponent has minions to Rush, the Scalehide can be returned to hand and replayed multiple times, while each time the card attacks the hero gains 4 health from Lifesteal.

If you get this minion off of Build-a-Beast, its keywords provide a lot of healing and board control when combined with a bigger beast.

Vicious Scalehide is unique to Hearthstone and does not closely resemble any previously known creature from the Warcraft universe at the time of release, but a species has since been introduced called saurolisk that bear some resemblance to the Scalehide.