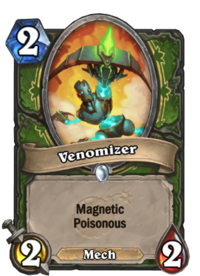 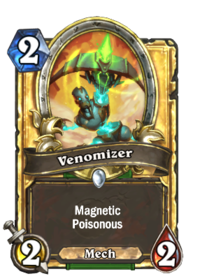 Keeps getting banned for toxic behavior.

Venomizer is a common hunter minion card, from The Boomsday Project set.

Venomizer can be obtained through The Boomsday Project card packs, or through crafting.

This card's stats are middling as a lone minion, but since it's Magnetic it becomes handy for making a better-statted Mech Poisonous while also buffing their stats; like Toxic Arrow but with much fewer downsides.

If Magnetized to a Mech that deals damage with an ability, such as Missile Launcher, Venomizer can give the ability Poisonous, allowing it to destroy any minion. While Missile Launcher is one of the few options for such a combo in Standard format, Wild format has also has Explosive Sheep as an option. Both would allow a full board clear, with Missile Launcher clearing the board at the end of each of the player's turns. A less destructive and more random option would be Demolisher which would have the potential of destroying a minion a turn if a Venonmizer was magnetized to it.