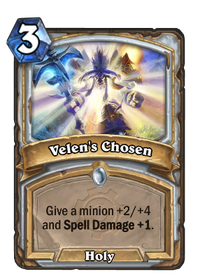 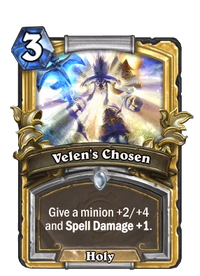 Velen wrote a "Lovely Card" for Tyrande with a picture of the Deeprun Tram that said "I Choo-Choo-Choose you!"

Velen's Chosen is a common priest spell card, from the Goblins vs Gnomes set.

Velen's Chosen can be obtained through Goblins vs Gnomes card packs, or through crafting.

Northshire Cleric is a solid target, escaping the range of Frostbolt or Fiery War Axe, and allowing the Cleric to kill a minion by surprise, then heal to build card advantage. Auchenai Soulpriest will be pushed safely out of range of a 5-damage Circle of Healing. Echoing Ooze is another very good buff target since it will summon a second 3/6 Ooze with +1 Spell Damage at the end of the turn, meaning that if both Oozes survive, next turn your Holy Smites and Holy Novas will do double damage to all enemies.

Do not feel compelled to use the Spell Damage because the stat boost is efficient without it. For a deck heavy on copying effects like Mindgames, it allows minions to trade favourably with their counterparts. The extra health granted to a minion works well with the Divine Spirit/Inner Fire combo. 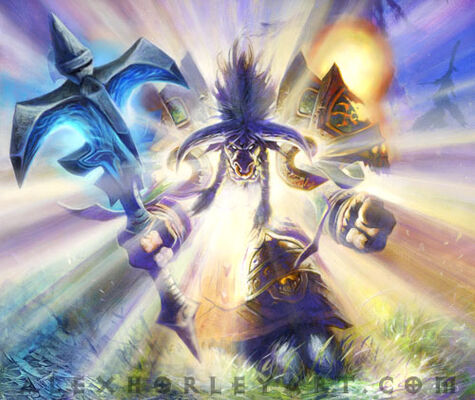