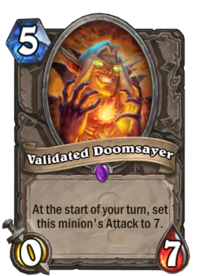 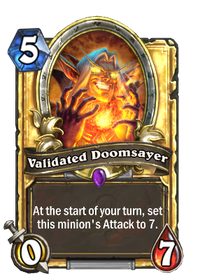 At the start of your turn, set this minion's Attack to 7.

Really feels good about himself and is in a much better place now. But… he sure does miss piloting those shredders.

Validated Doomsayer is an epic neutral minion card, from the Whispers of the Old Gods set.

Validated Doomsayer can be obtained through Whispers of the Old Gods card packs, or through crafting.

This minion has very powerful potential, since it becomes a 7/7 minion at the start of your next turn, which is very efficient for only 5 mana. However, since it starts with no Attack, your opponent can easily use whatever minions they have on the board to attack or destroy the Validated Doomsayer and not take any damage in return. In addition, like its “normal” counterpart Doomsayer, this minion is initially vulnerable to having its Attack and Health swapped, so Crazed Alchemist can destroy this minion easily and efficiently if used quickly. It’s best to use this minion alongside minions with Taunt and high Health so enemy minions are forced to attack the Taunt minion and not the Validated Doomsayer. Rogues can use Stealth-granting cards such as Conceal and Master of Disguise to hide the Validated Doomsayer at least until next turn, when it will gain its full value.

It is also worth noting that this minion's triggered effect effectively renders it immune to Attack modifiers of any kind, as it will always attempt to set its Attack back to 7 at the start of the turn. This means Attack reduction enchantments from cards such as Aldor Peacekeeper or Keeper of Uldaman will have no lasting effect. Helpful Attack/Health buffs such as Mark Of the Wild and Blessing of Kings can still be useful for attacking that turn, defending on the opponent's turn, or for the extra Health, but any extra Attack will be lost at the start of the next turn.

As a 0-Attack minion, it's one of the few minions that can be summoned from an unbuffed Meat Wagon, and one of the best.

Summon
I was right all along... hahahaha!

This is the corrupted version of Doomsayer. It remains unclear whether the arrival of the Old Gods was the doom originally expected by the Doomsayer, but he appears quite happy to accept it as fulfilment of his prophecies. After several years of hit and miss predictions, the validation has clearly done this Doomsayer a world of good, transforming him from a tankier Shieldbearer to something closer in stature to a giant.

NPCs with the title of Validated Doomsayer were later added to World of Warcraft in the Broken Isles Dalaran following the appearance of Argus in the skies over Azeroth. One of the pamphlets handed out by the NPCs includes the quote "I was right all along." 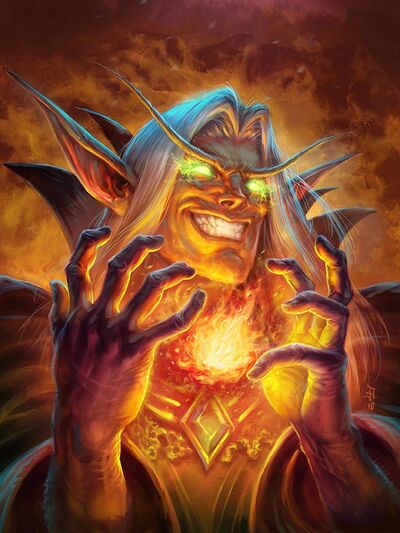