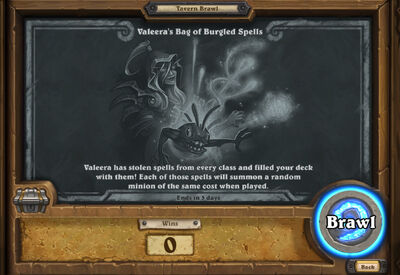 "Valeera has stolen spells from every class and filled your deck with them! Each of those spells will summon a random minion of the same cost when played."

Valeera's Bag of Burgled Spells is a Tavern Brawl. It debuted on November 23, 2016. For exact times, see the schedule.

Additionally, Valeera's Bag of Burgled Spells was one of nine Tavern Brawls featured as part of the 100th Brawl, A Cavalcade of Brawls!, when its mechanics were used by, of course, the rogue class. Also it a part of the 207th Brawl, The 207th Brawl Spetacular!.

This Brawl sees all players doing battle as the rogue hero Valeera, with randomized decks consisting entirely of spells from any class. Whenever a spell is cast, a random minion of the same mana cost is summoned for the player.

Example: Twisting Nether will cause the brawl to summon an 8 mana minion, then the spell will destroy it.

A highly random Brawl without the option to choose either the player's deck or class, success depends upon making the most of the options presented to you, and being able to respond to the unpredictable results of the random summoning that follows each spell.

The doubled value of each card played means this Brawl tends to ramp up pretty quickly, although the limited mana cost means it is mostly with a swarm of lower cost minions rather than larger threats. As a result AoE removal can be very powerful, and should be used wisely. Removal aside, the large number of minions means the player who is able to take control of the board early on often wins the match. Mulliganing for low-cost cards is strongly advised.