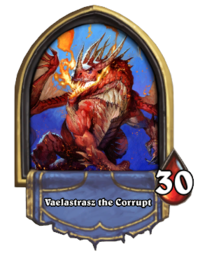 Vaelastrasz is a good dragon, but Nefarian is making him evil against his will!

Vaelastrasz the Corrupt is a boss encounter found in the Blackrock Mountain adventure. It is the second encounter of the adventure's fourth wing, Blackwing Lair. 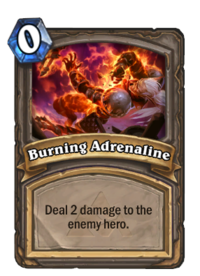 Vaelastrasz's Normal mode hero power Essence of the Red forces each player to draw two cards. He uses this to his advantage by milling both your cards and his own to use cards like Goblin Sapper, Twilight Drake, Volcanic Drake, Molten Giant and Clockwork Giant, in which the cards in both hands and the number of minions died that turn matter. On top of that, he uses Naturalize to cause you to reach fatigue and Gang Up to re-stock his deck to prevent himself from reaching fatigue. He also combos with his spells to attempt to remove your smaller minions and at the same time create some small minions to stall till both hands are full.

A good class against this is warlock with low cost/effective Deathrattle minions from Naxxramas, minions and spells with discard effects. You will also need Taunt minions and powerful spell cards such as Hellfire, Shadow Bolt, Corruption, Sacrificial Pact and Soulfire. Primarily, you want to focus on the Demon type to synergize with your spells. DO NOT include any card draw mechanisms else you will fatigue.

Rogue is also a very good class against Vaelastrasz. Gang Up can be used against him on his Clockwork Giant and your Preparation, Backstab, Sap, Assassinate and Vanish are more efficient than his. If you have Mountain Giants of your own, all the better.

Generally you want to play Mana Wyrm or Leper Gnome on turn 1, and Sorcerer's Apprentice + Mirror Image + Arcane Missiles or 0-mana minion on turn 2. Then depending on the situation, try to keep Sorcerer's Apprentices and Flamewakers alive (if possible) and go for the face. Using this strategy, the boss is not able to utilize his desired tactic well and you should be able to overpower him. Fireball + fatigue damage (great if his full hand forces him to discard Gang Up) are usually enough to finish him. Use Frost Novas after you lose your Taunts to prevent him from hitting your hero.

Another class that deals with Vaelastrasz very well is hunter. A fleet of low cost minions (0-2 mana) ensure pressure and damage. Explosive Trap and Hunter's Mark are cheap ways to clear Vaelastrasz's board, and Unleash the Hounds can deal lots of damage in short time. 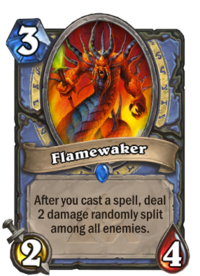 Nefarian
See how easily I can corrupt even this giant red dragon?

Vaelastrasz the Corrupt
Flee! Before I lose control...

Vaelastrasz the Corrupt
It's too late. Nefarian's corruption has taken hold.

Vaelastrasz the Corrupt
The fury of Blackrock courses through my veins!

Vaelastrasz the Corrupt
You should have fled while you could, mortal.

Vaelastrasz the Corrupt
At last. The agony ends.
Nefarian
Hah! You've killed one of the good guys. Does this make you sad?

Vaelastrasz the Corrupt
Forgive me friend. I have failed.

Vaelastrasz was once one of the good guys - a happy-go-lucky red dragon. Victor Nefarius used dark magic to corrupt him, forcing the ferocious red dragon to serve the Lord of Blackwing Lair against his will.[1]

"Ah, the heroes, you are persistent aren't you? Your ally here attempted to match his power against mine - and paid the price. Now he shall serve me...by slaughtering you. Get up little red wyrm...and destroy them!" - Lord Victor Nefarius

Vaelastrasz is a member of the Dragonqueen Alexstrasza's red dragonflight who fought against - and became enslaved by - the vile Nefarian, son of Deathwing, master of the black and chromatic dragonflights. He resides in Nefarian's citadel of Blackwing Lair and is the second boss of the raid, after Razorgore the Untamed.

Vaelastrasz is a red dragon. He is also known as Vaelan when he is in human form. He is initially a friendly NPC to the player, but eventually becomes a foe. In the WoW story, Vaelastrasz (commonly referred to as Vael) has sworn to hunt Nefarian and the black dragonflight until the end of his days.