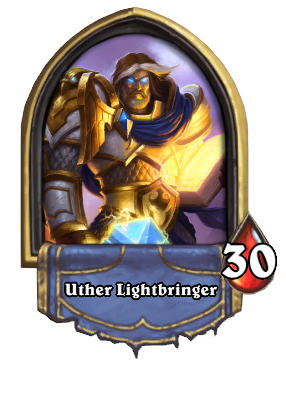 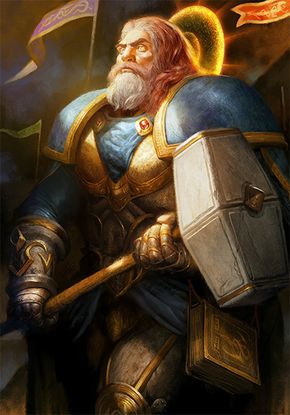 The sobriquet “Lightbringer” is not softly won, nor softly maintained beyond death. The legend of noble Uther guides the Alliance years after his passing.

Many devout followers of the Light were killed during the First War, unprepared for the sheer brutality of warfare against the Horde. The leader of the Clerics of Northshire, Alonsus Faol, believed that the Light could protect the faithful and devoted, and thus began training the most virtuous knights of Lordaeron to wield the Light in battle.

The first knight to be named a paladin was Uther, who helped found the Knights of the Silver Hand alongside Archbishop Faol and became a legend among his order. When the Second War began, Uther fought alongside his brother-in-arms, Turalyon, to fend off the forces of Horde commander Orgrim Doomhammer and lead the Alliance in a final, successful attack on the Dark Portal. In the wake of the Horde's defeat, Uther helped rebuild Stormwind City and cared for the sick and injured.

Uther remained in a leadership role with the Silver Hand for years, eventually taking Lordaeron's prince, Arthas Menethil, as his apprentice. The two forged a close relationship as teacher and student, and together they served justice throughout the land…until the Scourge struck Lordaeron. Arthas' growing anger at the spreading plague of undeath led him to horrific acts—such as the culling of Stratholme—and his thirst for vengeance drove him to madness. After the prince became a champion of the Lich King and killed his own father, Uther decided to personally guard the urn of the slain king. Arthas and Uther fought in Andorhal, and when the battle ended, the legendary paladin lay dead.

Today, followers of the Light pay their respects to Uther at Stormwind's cathedral, where a statue of the revered paladin was built. A dedicated few trek to his tomb in the Western Plaguelands, where the Lightbringer's memory is an unyielding gleam in a land of death. 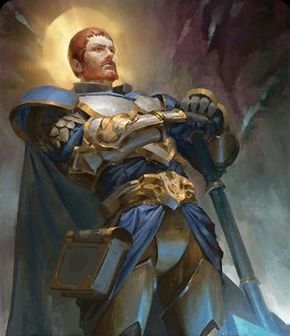 Uther during the Second War

The legendary Uther Lightbringer was the first paladin of the Knights of the Silver Hand and a champion of the Light, sworn to defend the Alliance of Lordaeron from any potential threat. Wise, pious, and a beacon of hope to his allies, Uther is regarded as one of the greatest knights to ever live.

The kingdom of Stormwind was once a land of peace and prosperity. The age of tranquility came to a sudden end when orcs swarmed into Azeroth from the Dark Portal—a magical gate that connected the world of Azeroth with the orcish homeworld of Draenor. The orcs assaulted Stormwind’s kingdom, eager to plunder and claim its lands for their own. This was the start of what is now called the First War.

The clerics of Northshire took up arms to defend their lands from the orcish invasion, but it became evident that it would take incredible efforts to defeat the evils that threatened them. Their holy order of clerics took great losses; as strong as they were in spirit, they lacked the formal martial training of knights and had little understanding of the art of war.

Archbishop Alonsus Faol formed a new order that would combine the restorative and destructive powers of the Light with the strict martial training of the knights. Archbishop Faol chose his apprentice Uther to be the first of this new order. These holy knights became known as paladins, with Uther being appointed the First Paladin.

The order started by Archbishop Alonsus Faol was known as the Order of the Silver Hand. The Archbishop recruited knights willing to learn how to wield the Light and clerics ready to take up arms for their noble cause. The paladin’s potent combination of fighting prowess and holy powers made them incredibly formidable opponents in battle, and Uther was the greatest among them.

After the First War, many of the survivors of Stormwind traveled to Lordaeron to seek aid and succor from King Terenas Menethil II. The leader of Lordaeron formed alliances between the human kingdoms to unite them against the orcish Horde that swarmed over the lands.

The orcs assaulted numerous cities and key points throughout the Eastern Kingdoms, with the Alliance doing their best to try and stop the them. However, not all human kingdoms within Lordaeron rallied to the Alliance’s cause. The Kingdom of Alterac, led by Lord Perenolde, chose to instead strike a deal with the Horde, fearing that the Horde would emerge victorious over the newfound Alliance once the smoke had cleared. This treachery caused numerous problems for the Alliance, and led to an attempt on Uther’s life. 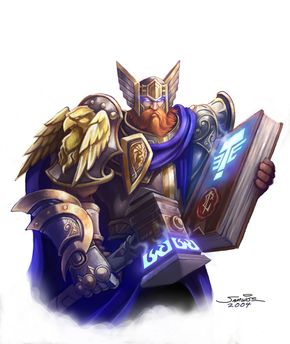 Uther as depicted by Samwise Didier

The Horde’s forces were slowly weakening against the growing Alliance. In a mighty push, the Alliance assaulted a major Horde fortress located in the Burning Steppes. Uther and his paladins were on the front lines in the battle of Blackrock Spire, and he earned the honorific “Lightbringer” after the battle.

With the capture of the Horde warchief, the Alliance pressed on to the orc’s last stand: the Dark Portal itself. General Turalyon led the Alliance’s charge against the orcs at the Dark Portal in what was considered the fiercest battle of the Second War. The Azerothian side of the Dark Portal was destroyed, thanks in part to the bravery and skill of Uther Lightbringer and the Order of the Silver Hand.

After the Second War, Uther continued to bravely serve the Alliance and its people, mentoring new paladins to the Order and serving as a shining example to aspiring knights and clerics throughout the Eastern Kingdoms. Uther took on the task of tutoring King Terenas’s talented son, Prince Arthas Menethil, in the ways of the paladin. Arthas and Uther trained together for years and grew as close as a family.

As the Third War began, Uther’s assistance was requested and he met with the young Jaina Proudmoore. Jaina brought dire news—the mysterious plague that was ravaging the kingdom was turning the infected into the undead Scourge, and Hearthglen was under attack from the seemingly endless army of undead victims that had fallen to this horrific illness. Uther and his paladins came just in time to help Jaina and Arthas, saving Hearthglen with their combined efforts.

Determined to save his kingdom, Arthas pressed on to Stratholme, but it was too late—the townsfolk had consumed tainted grain, the mechanism for quickly and efficiently spreading the plague throughout the kingdom, and would soon become the Scourge. Arthas ordered Uther and the Knights of the Silver Hand to destroy the town and the innocent people within. Uther adamantly refused the orders of the young Prince, telling Arthas he would not follow such an order—even if Arthas were the king himself. Furious with Uther’s defiance, Arthas accused Uther of treason and relieved Uther from command of the Knights of the Silver Hand and ordered those loyal to Lordaeron to join him in purging Stratholme of the impending evil. Uther took the paladins that remained loyal to him and left Stratholme, abandoning Arthas to his barbaric actions.

Uther informed King Terenas Menethil of his son’s inhumane actions in Stratholme, and much to the sorrow of the king, they agreed that Arthas’ judgment, and perhaps sanity, was wavering. Terenas sent an emissary to recall Arthas’ expedition in Northrend and order their return to the Kingdom of Lordaeron.

Arthas returned some time later, to the joy and celebration of Lordaeron’s townsfolk. However, Uther and the townsfolk were all shocked as Arthas drew the cursed Runeblade, Frostmourne, and slew his father in the Lordaeron throne room.

Uther had lost his king and one of his closest friends. He vowed to personally guard the king’s remains, which were placed in a ceremonial urn within Andorhal. There would be no safe haven for Uther and the remaining Order of the Silver Hand. Arthas, now a death knight, commanded his undead forces and swarmed the town, intent on taking Terenas’s urn for their own dark purposes. Uther would not back down from the impossible odds, bravely and defiantly standing toe to toe against the death knight to defend Terenas’ remains in a battle for the ages. Uther met his end at the hands of his former pupil, whom he once loved and cared for like his own son.

Uther’s tomb can be found in the Western Plaguelands, a shining beacon of hope in a land once overcome by darkness. His legacy lives on through the actions and teachings of the paladins, Azeroth’s brave defenders of the Light.[1]

When viewed in the Collection, Uther has the following flavor text:

Leader of the Knights of the Silver Hand. Best-selling author of The Light and How to Swing It. 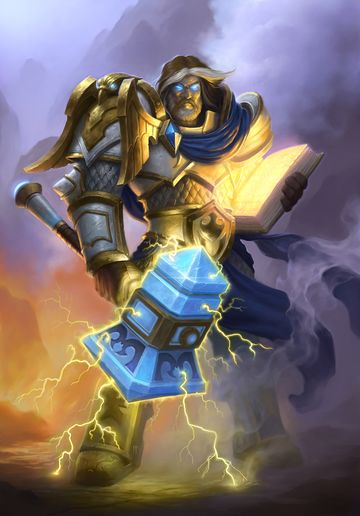 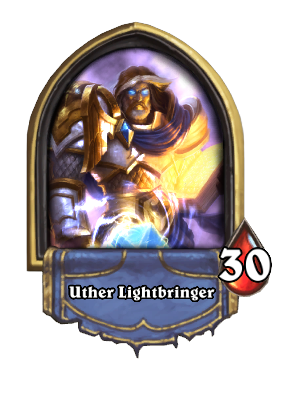 Uther is voiced by Michael McConnohie.