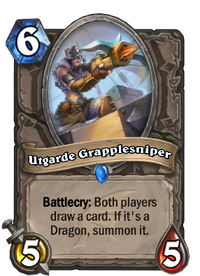 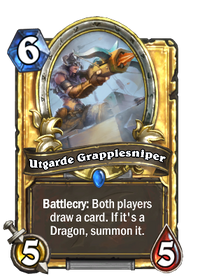 Battlecry: Both players draw a card. If it's a Dragon, summon it.

Note: The dragon may be a little cranky upon arrival.

Utgarde Grapplesniper is a rare neutral minion card, from the Descent of Dragons set.

Upgrade Grapplesniper is an okay card in any deck that runs a large amount of dragons. If you do not draw a dragon, it is essentially a worse Big Ol' Whelp as it costs one more mana crystal and also draws a card for your opponent. On the other hand, it can summon a large value dragon such as Sleepy Dragon, Ysera, Deathwing, or Malygos for relatively low mana.

This card can be used in mill decks to bring your opponent closer to fatigue, although it is very slow and inefficient at doing this. You can offset that by playing a dragon/fatigue hybrid to get the best out of both effects.

Summon
This is how you catch a dragon.
Attack
Hook, and hold on!

Utgarde Keep (pronounced OOT-ghaard) is the name of a keep which is the location of two dungeons in World of Warcraft, as well as the first dungeon of the same keep. The keep is located on the shores of Lake Cauldros in the Howling Fjord of Northrend.

Utgarde is inhabited by the vrykul (led by King Ymiron), a Viking-like race bent on proving their strength to the Lich King, who will raise the most worthy of their warriors to serve him beyond the grave. Enemy encounters within the keep include vrykul, their minions (such as worgs), and various types of undead.