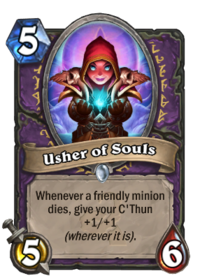 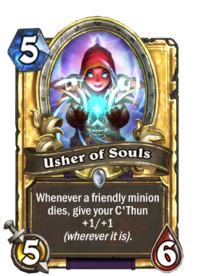 Whenever a friendly minion dies, give your C'Thun +1/+1 (wherever it is).

Usher of Souls is a common warlock minion card, from the Whispers of the Old Gods set.

Usher of Souls can be obtained through Whispers of the Old Gods card packs, or through crafting.

Summon
Get in line.

Attack
One by one.

This can be played just before trading one or more minions to gain a nice buff to your C'Thun. However, the difficulty in arranging this means there are more reliable alternative C'Thun cards, which are generally preferable unless the player has a good chance of activating the effect at least 3 times. It could work well in a smaller-minion C'Thun deck, with a lot of trades occurring. The minion itself is a solid 5/6, but its ability means it will likely be a priority for removal.

The Usher of Souls is clearly in the service of C'Thun, although the exact meaning of her disturbing title is perhaps better left unlearned.