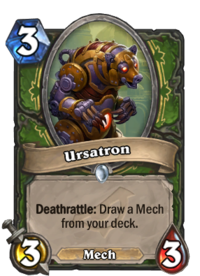 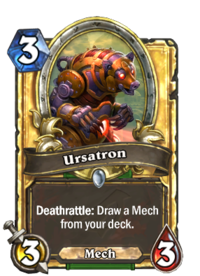 Deathrattle: Draw a Mech from your deck.

It's been programmed to include all the bear necessities.

Ursatron is a common hunter minion card, from the Rise of Shadows set.

Ursatron can be obtained through Rise of Shadows card packs, through crafting, or as an Arena reward.

Ursatron has much higher than standard stats for its cost for a minion with a Draw effect. It will only draw Mechs though, which can be viewed as either a positive or negative. On the one hand, this requires you to run a decent amount of Mechs for Ursatron to gain value. On the other hand, if you specifically want to draw into your Mechs, Ursatron can help keep your deck running smoothly while providing solid board presence.

Being a Mech with Deathrattle, Ursatron has synergy with all Mech-specific cards (including Magnetic minions), as well with any cards with Deathrattle synergy. In particular to Hunter, Ursatron synergizes fantastically with Fireworks Tech, Necromechanic, Oblivitron and Nine Lives.