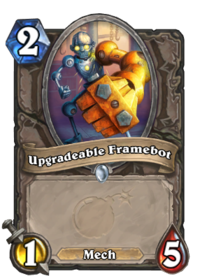 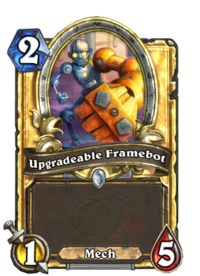 Upgradeable Framebot is a common neutral minion card, from The Boomsday Project set.

While its stats are unimpressive, this minion has the benefit of being a Mech, which means it is a valid target for Magnetic minions. Normally its Attack is far too low to be usable, but any Magnetic attachment will bring it up to reasonable levels while retaining high durability. A Bronze Gatekeeper or Annoy-o-Module can shut down aggro, while Venomizer creates a Poisonous minion that can take multiple hits to destroy.

Without Mechs, Upgradable Framebot is still a decent target for other buffs like Blessing of Kings and Spikeridged Steed.

Summon
What is my purpose?
Attack
I comply!