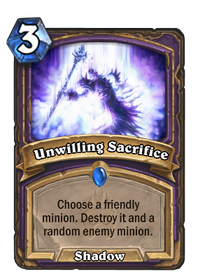 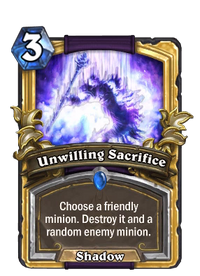 Choose a friendly minion. Destroy it and a random enemy minion.

Unwilling Sacrifice is a rare warlock spell card, from the Knights of the Frozen Throne set.

Unwilling Sacrifice can be obtained through Knights of the Frozen Throne card packs, or through crafting.

Unwilling Sacrifice is an inexpensive removal spell with largely situational applications. Since it requires a friendly minions in play to sacrifice, it can be difficult to use. As a result, it is most useful when combined with a card that can generate more minions, such as Devilsaur Egg, or a minion that is almost dead anyways. Slow Warlock decks, which desire hard removal, do not have easy access to cheap minions to sacrifice, where as Aggressive decks like Zoolock that do, generally do not desire hard removal and would rather spend Mana developing the board. Blastcrystal Potion and Siphon Soul already offer adequate single-target removal for a controlling warlock deck, and having a weaker version of a Hunter's Deadly Shot does not seem to have it's place in these decks.

In Arena, Unwilling Sarcifice has some potential, although it may not always be easy to find a good friendly minion to sacrifice. It can be worth considering sacrificing a stronger minion if needed, as losing card advantage is less significant in Warlock thanks to their ability to Life Tap.