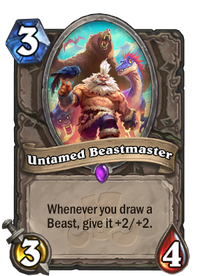 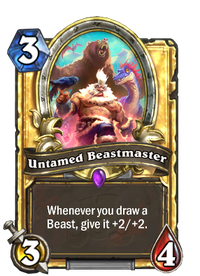 All it takes is a tummy rub.

Untamed Beastmaster is an epic neutral minion card, from the Rastakhan's Rumble set.

Untamed Beastmaster can be obtained through Rastakhan's Rumble card packs, or through crafting.

Untamed Beastmaster is obviously an excellent card for Beast heavy decks like Hunter and some Druid variants. The main struggle of utilizing it is keeping it alive. It's a good idea to keep Beastmaster protected on the field by using Taunts or spells to maintain board control. at 3/4, Beastmaster struggles to survive most removal spells and strong minions.

A beastmaster, also known as beast master, is a warrior hero or wilderness warrior who is able to call forth the creatures of the forest to serve him. These lone wandering forest dwellers come from all backgrounds and cultures, seeking the essence of combat through the mimicry of wild beasts.

Among the most gifted hunters, there are those who have from birth felt a profound bond with the creatures of the wild. These beast masters are drawn to the perilous primal world, invigorated by its dangerous and untamed nature. Primitive landscape becomes home. Ferocious predator becomes kin. Whether in the thrill of the hunt or the heat of battle, beast masters call forth a litany of vicious animals to overwhelm prey and gnaw at their enemies' will.

While the most famous beastmasters are mok'nathal (with the most notable one being Rexxar), beastmasters are found among the ranks of many other races as well. This particular dwarf appears to be enjoying the company of a bear, cat, bird, bat, and saurid.