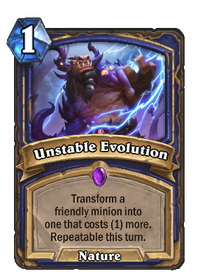 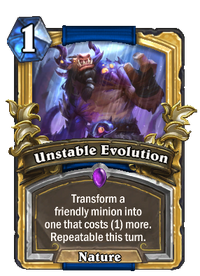 Transform a friendly minion into one that costs (1) more. Repeatable this turn.

They grow up so fast.

Unstable Evolution is an epic shaman spell card, from the Kobolds and Catacombs set.

Unstable Evolution can be obtained through Kobolds & Catacombs card packs, or through crafting.

Compared to Evolve, this card is better suited to evolve one or few minions into a much higher costing minion rather than many at once. Since this spell is repeatable, you have better control over the outcome since you can "reroll" an evolution if the outcome is bad or unfavorable.

Since the repeated casts function like any other spell, cards that synergize with multiple spell casts like Arcane Giant and Gadgetzan Auctioneer work well with this card.

Be warned that, when Evolving into a 6-cost or an 8-cost minion, that you have the chance of rolling a Nerubian Unraveler or a Naga Sea Witch, respectively, which may throw off your Evolution chain.

If you are lucky enough to gain a Sorcerer's Apprentice or Radiant Elemental, you can evolve your other minions an almost unlimited amount of times (as you can't evolve them into anything higher than a 12-cost), and if you get an Archmage Antonidas you can gain a lot of Fireballs.