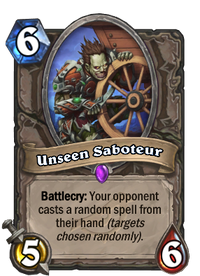 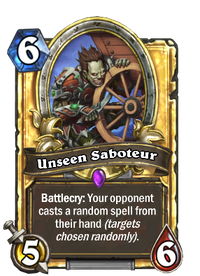 Battlecry: Your opponent casts a random spell from their hand (targets chosen randomly).

Unseen Saboteur is an epic neutral minion card, from the Rise of Shadows set.

Since this minion has below-average stats and the potential for a disastrous effect, it should only be played if you're looking to interrupt an opponent's combo or waste value. At its most basic, Unseen Saboteur will effectively discard a card from your opponent, wasting one of their spells at an inopportune time. How you set up for Unseen Saboteur depends on what you think your opponent is holding. If you think they have an important summoning spell like Zerek's Cloning Gallery or The Forest's Aid, save an AoE effect to deal with the aftermath. If you think they have a board clear, play this on an empty board. Try to play this when common spells will have no value, such as Battle Rage when the opponent has no damaged characters.

Beware of purely beneficial spells like Dragon Roar or Unstable Portal, since you'll essentially give them value for free.

You can use Lorewalker Cho and give the opponent a detrimental spell like Myra's Unstable Element then play Unseen Saboteur to force them to play it. This gimmick is not guaranteed, however.

Summon
You didn't need that, did you?
Attack
Oh, did that hurt?