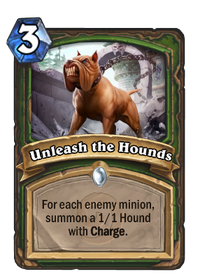 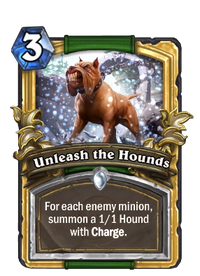 For each enemy minion, summon a 1/1 Hound with Charge.

You must read the name of this card out loud each time you play it.

Unleash the Hounds is a common hunter spell card, from the Classic set. For each enemy minion in play, it summons one 1/1 Hound with Charge.

Unleash the Hounds can be obtained through Classic card packs, through crafting, or as an Arena reward. 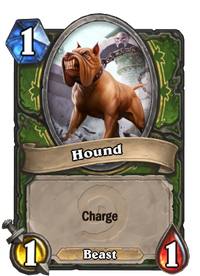 Unleash the Hounds is one of the simplest and most devastating combo cards available to the hunter. It also synergies with several key hunter cards, and can serve a number of different purposes, from card draw to removal to directly defeating the opponent through burst damage. Its low cost allows it to be played alongside several other cards to make these powerful combinations, especially in later rounds.

The Hounds summoned by Unleash the Hounds are useful, but weak. Other Beast cards such as Timber Wolf and Dire Wolf Alpha are the perfect remedy for this. They can transform these 1/1s into something far more powerful. Other options such as Raid Leader can also be useful, but Beasts are generally preferable to due to synergy with other Hunter cards.

Because Unleash the Hounds summons one Hound for each enemy minion on the board, it is most powerful when the opponent has a large number of minions in play. Under the right conditions, these weaker Beasts can be used to trade for far more powerful minions, allowing the hunter to turn the game around and reclaim the board. Excellent cards to combine with the Hounds include Hunter's Mark and Kill Command, to easily remove any threats from the battlefield.

Another great combination with Unleash the Hounds is Scavenging Hyena, which could gain up to +12/+6 from the Hounds when Unleash is played while the enemy has 6 or 7 minions, whereas 7 minions at one time is the maximum a player can have on the battlefield.

Other good combinations include King of Beasts, Infest and Acidmaw, where the latter can be played at 10 mana to efficiently destroy all enemy minions on the battlefield.

Note that because Unleash the Hounds is a summon spell and not a direct minion summon, the Hounds themselves cannot be placed, and will always appear to the far-right of the player's board. This can make it disadvantageous to play cards such as Dire Wolf Alpha before summoning the Hounds.

The main counters to Unleash the Hounds are Taunt minions and AoE damage. The former can be used to force the Hounds to trade into a single powerful target, and this is usually the only option available to prevent the Hounds from overrunning the player entirely. Making sure to have a Taunt on the board as the game approaches the mid- to late-game is the main defence against this assault.

The second counter is the more efficient and cheaper. Think of cards like Fan of Knives and Twilight Flamecaller. The optimum counter is Counterspell, which can also prevent other powerful Hunter spell cards like Call of the Wild.

Another way of countering Unleash the Hounds is to limit the number of friendly minions on the board. Every friendly minion is one additional Hound for the opponent. Limiting minion numbers to two or three can prevent the hunter from making good use of the card.

Any combo cards set-up in advance, such as a lone Timber Wolf, should of course be removed immediately, as these can allow the combo to build to even greater proportions.

The card was changed into a four mana card that summoned one 1/1 hound with charge for each enemy minion. This version was considered underpowered and was rarely played.
After the mana cost was reduced to 2, the card was considered to be overpowered once again, and was held responsible by Blizzard for the dominance of hunters across many levels of play, as explained in an official blog. To counter this, with Patch 1.0.0.5314 the card's mana cost was increased from 2 to 3, slightly reducing its effectiveness as a combo card, and preventing it from being played so early in the match. 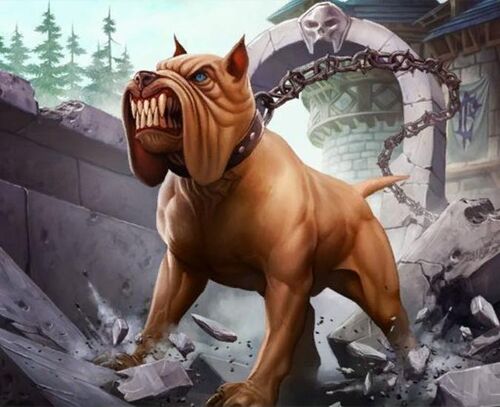