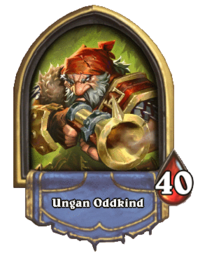 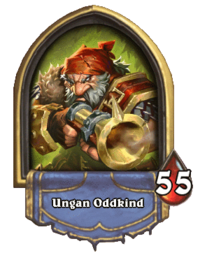 Ungan Oddkind is a boss that can be encountered in The Dalaran Heist.

Ungan Oddkind runs a spell hunter deck, in order to keep up you have to keep dropping minions on the board to exhaust his arsenal.

Arch-Villain Rafaam
Ungan is crude but we can learn much from the artistry of his verbal abuse.

Mr. Chu
You are in my way.
Ungan Oddkind
C'mere ya big bloated bear-brained bar bouncer!

vs. George the Fallen

Ungan Oddkind
I get to borrow Misha every other week.
My pets are rearin' to go!
Thanks for givin' me time to reload.

Go for the throat!

Oh, a beastie battle it is, then!

Ha! You're hunting big game with THAT peashooter?
Equip a Hunter's weapon
We're to have a duel then?
Equip Hyperblaster
Now that's a fine weapon!