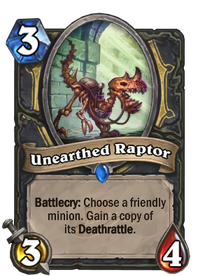 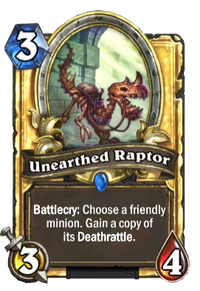 Battlecry: Choose a friendly minion. Gain a copy of its Deathrattle.

Still hunting for the ones who earthed him.

Unearthed Raptor is a rare rogue minion card, from the League of Explorers set.

Two copies of regular Unearthed Raptor are obtained by defeating the Mine Cart Rush encounter, the second stage in The League of Explorers's second wing, Uldaman.

As a Wild format card, both regular and golden versions of Unearthed Raptor can also be crafted for the following amounts:

Unearthed Raptor is strong with most Deathrattle cards but notable mentions go to Haunted Creeper and Nerubian Egg due to curve (as well as most players will avoid destroying said cards in general).

Skeletal raptors are undead raptors mainly found at Whelgar's Excavation Site in the Wetlands and the Za'Tual boneyard on the Isle of Thunder. The Unearthed Raptor bears a particular resemblance to the Fossilized Raptor, a skeletal raptor mount obtainable as a rare artifact from the Archaeology profession.