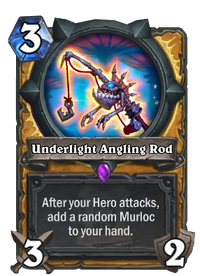 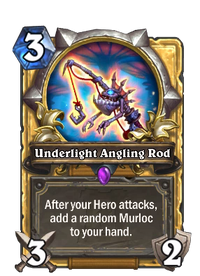 After your Hero attacks, add a random Murloc to your hand.

"I said I wanted the ASHbringer not FISHbringer!"

Underlight Angling Rod is an epic paladin weapon card, from the Ashes of Outland set.

A potent weapon for Murloc Paladin, which can give you board control to protect your vulnerable murlocs or additional Face damage to add pressure. It also refuels your hand, giving you two more murlocs to play.

Underbelly Angling Rod is also an okay card in non-murloc decks, although not as potent since the murlocs will be of less value. Highlander Paladin and Pure Paladin can make the most use out of a generically useful card due to having less options to pick from.

Since it can generate murlocs from any class, Underlight Angling Rod can give Paladins access to powerful minions like Underbelly Angler, Furious Felfin, and Scargil. Try to attack with your hero before spending mana whenever possible to see if you get a card you want to play.

This weapon appears to be based on the Underlight Angler.