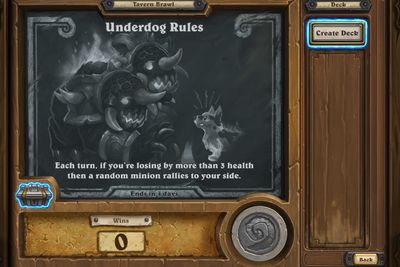 "Each turn, if you're losing by more than 3 health then a random minion rallies to your side."

Underdog Rules is a Tavern Brawl. It debuted on September 23, 2015.

During this Brawl, at the end of each turn if the other player is losing by more than 3 Health (including Armor), a random collectible minion will be summoned for them. Players are able to construct their own decks, using any class.

The obvious way to utilise this Brawl's feature is to build a deck that can be behind on Health for much of the game, but still win.

Warlock has obvious potential for the Brawl. Their Hero Power Life Tap, and quite a few of their class minions (Flame Imp, Pit Lord, Wrathguard) all help secure board control while lowering your own Health. Handlock or Zoolock might be good choices.

Other options might be Freeze mage, combo shaman and combo rogue.

Warrior and Druid are actually at a disadvantage in this Brawl, since Armor counts as Health for purposes of determining which player receives an underdog minion.

You should also bear in mind that you'll likely be playing against these classes, meaning there will be a lot less need for hard removal, and a lot more need for board control.