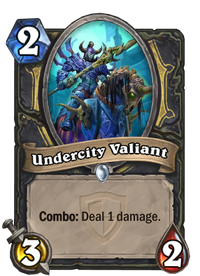 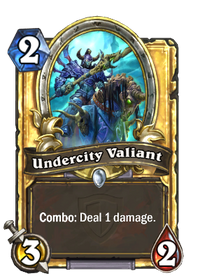 Almost went to play for Stormwind before signing with Undercity.

Undercity Valiant is a common rogue minion card, from the Grand Tournament set.

Undercity Valiant can be obtained through The Grand Tournament card packs, or through crafting.

A reasonable early game card for rogues. Works best with a cheap card such as Backstab to trigger its Combo early on.

Summon
Victory for Sylvanas!
Attack
Join us in death!

This minion is a Valiant representing the Undercity, the capital of the Forsaken.

The Undercity is the capital city of the Forsaken undead of the Horde. It is located in Tirisfal Glades, at the northern edge of the Eastern Kingdoms.

Far beneath the ruined capital city of Lordaeron, the royal crypts have been turned into a bastion of evil and undeath. Originally intended by Prince Arthas to be the Scourge's seat of power, the budding "Undercity" was abandoned when Arthas was recalled to aid the Lich King in distant Northrend. In Arthas's absence, the Dark Lady, Sylvanas Windrunner, led the rebel Forsaken to the Undercity, and claimed it for her own. Since taking up residence, the Forsaken have worked to complete the Undercity's construction by dredging the twisted maze of catacombs, tombs, and dungeons that Arthas began.