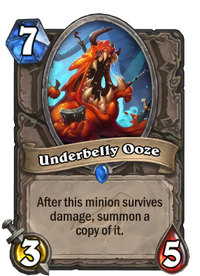 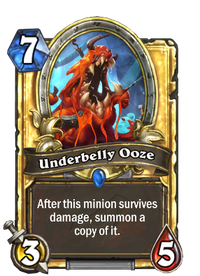 After this minion survives damage, summon a copy of it.

It's always accepting of the less successful adventurers.

Underbelly Ooze is a rare neutral minion card, from the Rise of Shadows set.

Underbelly Ooze's best use is multiplying buffs, since each copy will retain any effects. It is best with cards that give Taunt, Lifesteal, or Spell Damage, since it can spread these effects out regardless of health. However, setting up a situation for this is difficult.

This card is a poor substitute for Grim Patron, since it's quite expensive and each copy will be progressively weaker. However, it makes up for this with its higher health and its ability to transfer its own enchantments to its copies. When it is given Charge or Rush by cards such as Charge, Goblin Lackey or The Boomship, this can allow Underbelly Ooze to duplicate itself without the risk of being stopped the enemy, while also summoning copies who can attack enemy minions on the fly. However, this strategy is only reliable if the enemy has a deck consisting of weak, swarming minions such as zoo decks.

Additionally, Underbelly Ooze may be used as a Tech Card against cards that split damage randomly, such as Imprisoned Antaen and Priestess of Fury.

Overall, Underbelly Ooze's ability may not be very helpful at first glance, but its ability to transfer enchantments to its copies can make it powerful when played right.