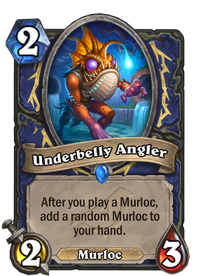 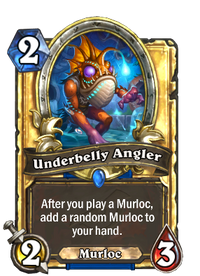 After you play a Murloc, add a random Murloc to your hand.

Underbelly Angler is a rare shaman minion card, from the Rise of Shadows set.

An incredibly powerful card for any Murloc deck. Its combination of solid vanilla stats and card generating effect make it a must-have.

Underbelly Angler is a priority kill for your opponent. Try to play it alongside other murlocs for immediate value, and use Coldlight Seer or Feral Spirit to protect it where possible. You can also guard it by giving a token murloc Poisonous with Toxfin.

Underbelly Angler has obvious synergy with Scargil, making your generated murlocs cost 1 mana. If played at 10 mana, this effect will create up to 4 murlocs while also playing 6 minions out. This combo is strong enough to use outside of a murloc deck, simply playing Angler then Scargil to get the generation started.