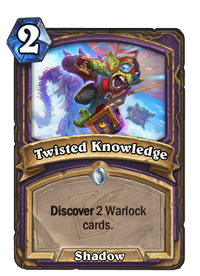 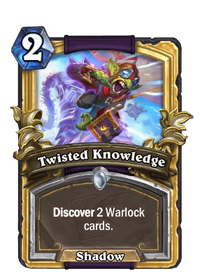 Twisted Knowledge is a common warlock spell card, from the Galakrond's Awakening set.

Two copies of regular Twisted Knowledge are obtained by defeating The Amazing Reno in Galakrond's Awakening's Chapter 1 of E.V.I.L. campaign.

This card is fairly low impact, despite a solid effect of generating two cards. This card can be Handlock deck to go +1 on card advantage, synergizing with cards like Mountain Giant, Twilight Drake, Dark Skies, and Abyssal Summoner. However, Warlock has access to Life Tap, which guarantees +1 card advantage and a card from your deck. Furthermore, many Warlock cards are undesirable for Handlock, as they include many minion-flooding effects, self-damage, and Discard cards that a Handlock wants to avoid.

Twisted Knowledge does have fringe use as a Zoolock tech, which can potentially find two cheap cards to play on the same turn. It also gives you two chances to search for direct damage like Soulfire, possibly securing lethal. It also works well with Discardlock, giving you two cards to discard.