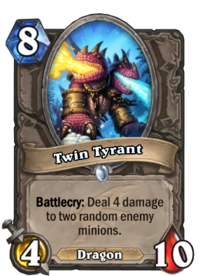 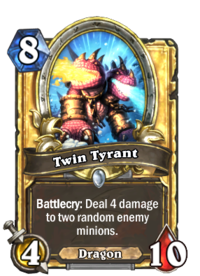 They can never agree on whether it's too hot or too cold.

Twin Tyrant is a common neutral minion, from the Descent of Dragons set.

Twin Tyrant can be obtained through Descent of Dragons card packs, through crafting, or as an Arena reward.

Twin Tyrant is very powerful in Arena. It has a strong statline that can take care of medium-sized enemies over the next few turns, has enough health to tank a direct damage spell, and its Battlecry deals 8 damage to minions in total, making it also a premium removal card.

Twin Tyrant is a drakeadon.

From Wowpedia:
Drakeadons are a type of four-legged, two-headed draconic beasts. One, Chromaggus, can be found in Blackwing Lair, and smaller ones can be found in Blackwing Descent. They were apparently created by the same experiments that made the powerful chromatic dragonflight. Like full chromatic dragons, they have the power of all five dragonflights. 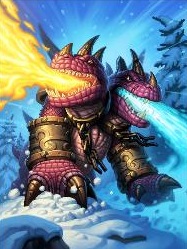