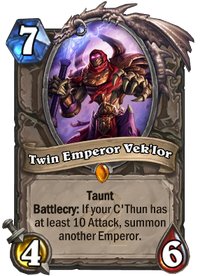 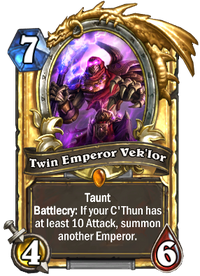 Taunt
Battlecry: If your C'Thun has at least 10 Attack, summon another Emperor.

Do they make decisions based on age? "I'm two minutes older therefore we burn this village."

Twin Emperor Vek'lor is a legendary neutral minion card, from the Whispers of the Old Gods set.

Twin Emperor Vek'lor can be obtained through Whispers of the Old Gods card packs, or through crafting. 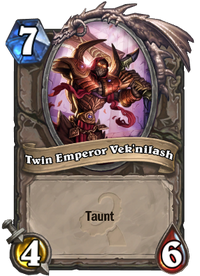 One of the best possible combinations is by playing this card with Brann Bronzebeard if C'Thun has at least 10 attack, which basically makes one 2/4 minion and three 4/6 Taunt minions for 10 mana; a great way to take control of the battlefield in one turn with only 2 cards.

Attack
There will be pain!

Vek'lor and Vek'nilash together comprise the Twin Emperors, a boss in the Temple of Ahn'Qiraj raid.

The clever brothers Vek'lor and Vek'nilash are known as the Twin Emperors. They rule over the qiraji from the sanctuary of their temple.

Little is known about the Twin Emperors, except the fact that they created two powerful entities to serve as champions of their armies.

In preparation for its reemergence in the world, the shadowy master of Ahn'Qiraj commanded Emperor Vek'lor to create a new obsidian statue superior to all other destroyers. Vek'lor sought his twin brother's aid in the task, and while Vek'nilash used his physical might to craft a grand body of volcanic rock, Vek'lor fortified the shell with powerful magic. Emperor Vek'lor named the finished construct Moam. They intended to use it as a colossal weapon, knowing that its strengths would help it survive in the thick of melee as well as magical combat, and observed as their dark master infused it with life. He was pleased and surprised to find that the improved obsidian destroyer was far more versatile than its earlier counterparts.

Emperor Vek'nilash gave a gift to Ossirian to honor his assault on Grakkarond. He bound Ossirian's essence to several ancient crystals of distant origin, which would grant him near invulnerability. The legends say that Vek'nilash secretly entrusted Ossirian with the responsibility of maintaining a watch on General Rajaxx, to ensure that the commander would never fail again.