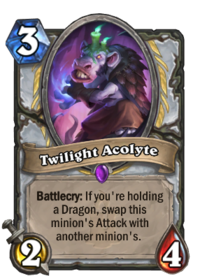 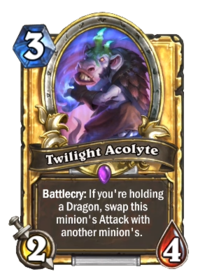 Battlecry: If you're holding a Dragon, swap this minion's Attack with another minion's.

The dragons mostly keep him around as a snack.

Twilight Acolyte is an epic priest minion card, from the Kobolds and Catacombs set.

Twilight Acolyte can be obtained through Kobolds & Catacombs card packs, or through crafting.

Used as pseudo-removal for high attack minions an opponent may play like Mountain Giant, legendaries or minions buffed with Inner Fire.

It also provides a nice combination with cards like Potion of Madness and Cabal Shadow Priest, gaining control of the left over high health minion which can still be troublesome, especially if it has Taunt.

This minion has notable anti-synergy with Lady in White, which sets an enemy minion's Attack to 4.

Based on its name, this kobold is a member of the Twilight's Hammer cult.

The Twilight's Hammer, also known as the Twilight's Hammer clan, Hammer clan, Twilight's Hammer cult, Twilight Cult, Cult of Twilight's Hammer or simply the Hammer, is a widespread nihilistic cult active across Azeroth that fanatically serves and worships the Old Gods and seeks to bring about the end of the world. Originally twisted from an orc clan into its current form by Cho'gall, the cult has been active since before the First War, but they became a major worldwide threat to both the Alliance and the Horde after Deathwing's return and the great Cataclysm shattered Azeroth.

Notably, this card represents the first time that a kobold has been shown to be affiliated the Twilight's Hammer. As such, it is unique to Hearthstone.