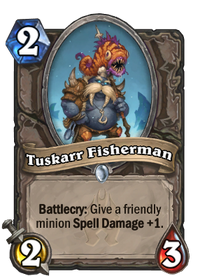 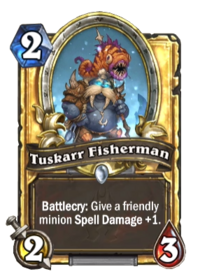 If you bring him 500 fish, he'll give you this sweet Kalu'ak Fishing Pole.

Tuskarr Fisherman is a common neutral minion card, from the Knights of the Frozen Throne set.

Tuskarr Fisherman can be obtained through Knights of the Frozen Throne card packs, or through crafting.

Tuskarr Fisherman plays a similar role to Ancient Mage, in that it gives other friendly minions Spell Damage. Because Spell Damage gets more value when played with many damage-based spells, this plays a more flexible role than the Mage because its lower Mana cost allows you to play more spells in the same turn. It is also comparable to Kobold Geomancer, but gaining 1 health in exchange for requiring another minion on board.

Tuskarr Fisherman's effect can also be given to minions with Stealth, improving the chances that the effect can be used over multiple turns.

Despite the absence of any records documenting the tuskarr's past, many significant facts have recently come to light. Brann Bronzebeard believes that the tuskarr may be descendants of a walrus Ancient Guardian, though for the moment this is only a theory.

The tuskarr are a kind-natured nomadic race that roams the southern coastlines of Northrend, guided by the carved cyclopean statues that mark their seasonal fishing routes. The tuskarr's tribal affiliation is evidenced by the sigils inscribed on their tusks, and although they are a peaceful race, they are constantly beset by the kvaldir and an arctic race of murloc-like creatures known as the gorloc. Yet even their enemies marvel at the tuskarr's prowess and fearlessness in catching some of the most dangerous creatures in Northrend's frigid waters, including whales and giant squid. Not even the unnamed leviathans that lurk in the ocean's depths are beyond the tuskarr's reach. The tuskarr use giant turtle boats as a transportation system among zones in Northrend. They lead the turtles by use of carrots on a fishing line.

The tuskarr have seen their share of difficult times, but with the Horde's recent arrival they have found a new ally in the ongoing struggle against the hostile forces of Northrend. The tuskarr formed a bond, and the Horde has sworn to aid their new allies in any way possible. It should be noted, however, that the tuskarr are a neutral faction, and both the Horde and Alliance are able to interact with them.

With the Scourge problem having been dealt with, the tuskarr are constantly on the move and looking for food. Some of them, like Wally and Trawler Yotimo decided it was time to head out and find some new fishing grounds in the south.