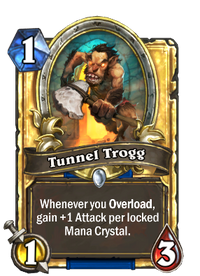 Whenever you Overload, gain +1 Attack per locked Mana Crystal.

Sure, they're ugly, but they live in tunnels. You try your beauty routine without natural light.

Tunnel Trogg is a common shaman minion card, from the League of Explorers set.

Two copies of regular Tunnel Trogg are obtained by defeating Chieftain Scarvash, the first boss in The League of Explorers's second wing, Uldaman.

As a Wild format card, both regular and golden versions of Tunnel Trogg can also be crafted for the following amounts:

A very strong 1 drop, with high health and a buff effect that can quickly scale. Can make a strong combination with Totem Golem if it is played on curve at the beginning of a game, and pairs with Flamewreathed Faceless, Feral Spirit, and Doomhammer on later turns. A solid early game pick for most shaman decks, especially Aggro Shaman.

When playing against a Shaman, prioritize killing the Tunnel Trogg was quickly as you can, since it can build Attack fast and pressure a lot of damage.