"Trump is the ringmaster of the circus of value." - TotalBiscuit[1]

Jeffrey "Trump" Shih is a noted streamer and professional player of Hearthstone: Heroes of Warcraft. 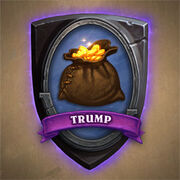 Trump's icon from the Innkeeper's Invitational 2013

On October 13th 2013, shortly after the beginning of the game's beta, Team Razer announced[2] that Trump had agreed to join their professional e-sports team, making Trump the world's first professional Hearthstone player.

Trump was one of 8 players invited by Blizzard to participate in the 2013 Hearthstone Innkeeper's Invitational at Blizzcon. After defeating Husky 3-0, Trump was defeated in the semi-finals, losing 1-3 to Artosis.

Trump was recognised in the 2013 Blizzard Stream Awards. He received the following awards. The full results can be found here.