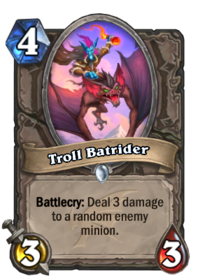 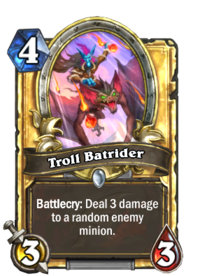 Troll Batrider is a common neutral minion card, from the Descent of Dragons set.

Troll Batrider can be obtained through Descent of Dragons card packs, through crafting, or as an Arena reward.

A very basic card, he is good in decks that can take advantage of battlecrys (such as quest shaman) but is often not that good except for in very specific situations. A good value pick in arena and a very basic pack filler elsewhere

Bat riders (also written batriders or bat-riders) are, as the name suggests, airborne troops that ride on giant bats. The fire-obsessed batriders of the Darkspear troll tribe are often used as reconnaissance for the Horde since the aftermath of the Third War.