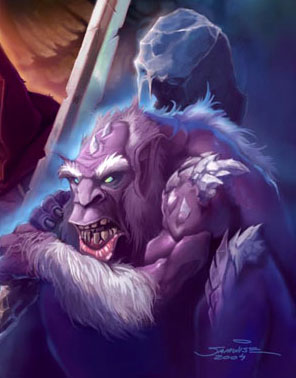 Troggs are a race of primitive, aggressive and extremely unintelligent humanoids found on Azeroth. The failed result of the keepers' initial attempts at creating a new race of titan-forged, the neanderthal-like troggs possess little in the way of intelligence, but are still a dangerous threat when encountered. In Hearthstone, troggs are known for spell-related triggered effects. 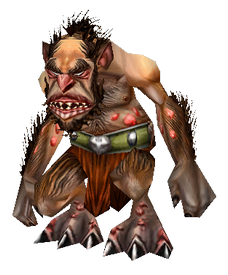 Following their war with the Old Gods, the titan-forged keepers set to work creating a new generation of titan-forged by using the Forge of Wills. However, their initial designs proved too complex, and the result was a race of stone-skinned brutes known thereafter as "troggs". Distressed by the savage creatures, the keepers refined their design, resulting in the earthen race. The keepers could not bring themselves to destroy their already-existing defect creations, and instead the giantess Ironaya created the vault of Uldaman to serve as a stasis chamber for the troggs. However, some troggs later managed to escape the vault and began wandering the world. One group somehow managed to make their way into Deepholm via Uldum more than fifteen thousand years ago. These troggs were not afflicted by the Curse of Flesh, unlike their cousins on Azeroth, and are therefore known as stone troggs, the "true form" of troggs.

During the reign of the mogu empire, Emperor Tian encountered troggs. The emperor, who needed messengers and deliverymen, warped the troggs using flesh-shaping, enhancing their strength, smell and sense of direction, creating the first grummles.

Buried deep within the earth, the troggs lay undisturbed for thousands of years until the dwarves excavated titan strongholds, such as Uldaman. Once disturbed, the troggs poured out of the ground, eager to take out their aggression on their distant dwarven cousins.

During the Third War, the gnomish capital of Gnomeregan was invaded by countless troggs. The traitorous Sicco Thermaplugg convinced High Tinker Mekkatorque to release poisonous gas to kill the troggs, but instead it had the opposite effect; the gas empowered the troggs and instead wiped out nearly eighty percent of the gnomish population, as well as turning many of the survivors into leper gnomes.

Force of will and a strong sense of cunning are the only driving factors in the psyche of the trogg. Troggs are known to engage in cannibalism; they consume stone and anything else they can acquire — including other troggs. In trogg society, the biggest, strongest, and most vicious trogg often becomes chieftain through displays of power.

Though they are cunning in battle, troggs usually do not possess high intelligence. Instead, they depend on their ferocity and tough hides to see them through. Most are vicious fighters, though some slightly more intelligent troggs have become spell casters as well.

Troggs in Hearthstone are intended to be experts at "disrupting enemy spell-casting", and typically grow stronger in response.[1] The enchantment effect for both the Stonesplinter Trogg and the Burly Rockjaw Trogg is called "Metabolized Magic", suggesting that the troggs' ability represents them absorbing or "eating" the spells of enemy casters. Alternatively, as troggs are known for very rarely being capable of mastering any form of magic, these abilities may depict an anger by the troggs at the use of magic.

While there are only a few trogg cards in Hearthstone, most share the behaviour of activating from casting spells. Most of those share a common trait: a triggered effect that activates when the opponent casts a spell. Tunnel Trogg is similar, but activates from friendly Overload generation.

Troggs were first introduced to Hearthstone with the Goblins vs Gnomes expansion. 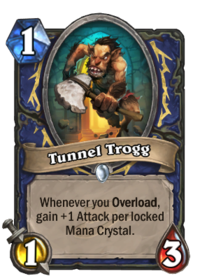 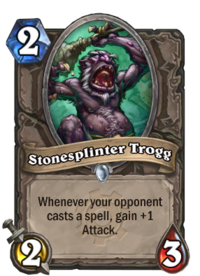 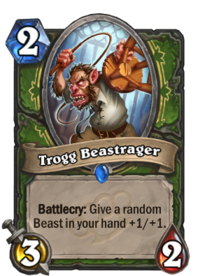 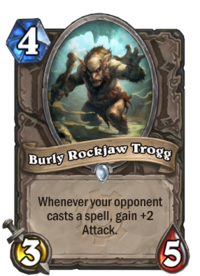 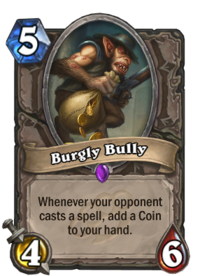 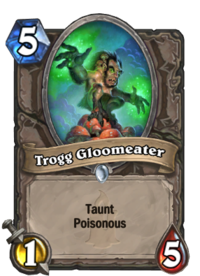 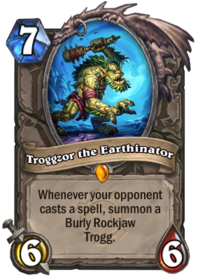 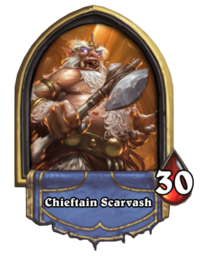