Treasure in the Catacombs! 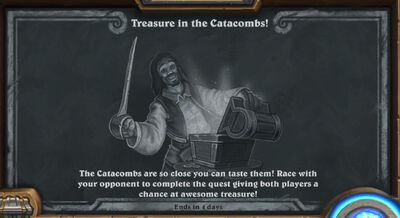 "The Catacombs are so close you can taste them! Race with your opponent to complete the quest giving both players a chance at awesome treasure!"

Treasure in the Catacombs! is a Tavern Brawl. It debuted on November 15, 2017 and rewarded a Kobolds and Catacombs card pack.

Additionally, Treasure in the Catacombs! was one of nine Tavern Brawls featured as part of the 207th Brawl, The 207th Brawl Spetacular!.

Each player gets a quest to summon 7 seven minions on the board. The one who completes it gains an 0/8 Master Chest and their opponent get a 0/4 Master Chest. The quest then refreshes itself. 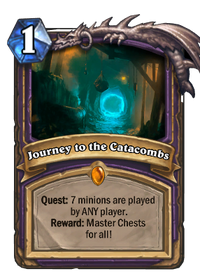 You must be the one to complete the quest as that will give you an easier chest to break. Don't simply flood the board, play conservatively.