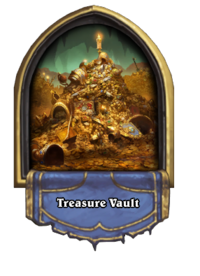 The Treasure Vault has no cards or health, and starts the battle with seven Treasure Coffers. These are 0/10 chests that put a random playable treasure into your Dungeon Run deck on death. However, you are on a time limit. The moment the Treasure Vault reaches 5 mana, it will activate its Hero Power, causing the level to end in the player's victory.