Trade Prince Gallywix is a retired hero that the player could pick in the Battlegrounds game mode. 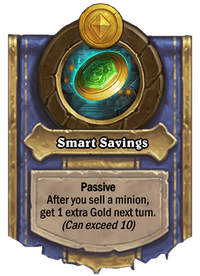 Instead of using excess gold to refresh and possibly find a minion you need, you can instead save it for next turn by getting a coin. This hero power can also be used to save up gold to upgrade your Tavern Tier earlier than usual if you want to rush a high tier minion for a certain build. Gallywix is versatile and can fit into basically any build, despite being pretty mediocre.