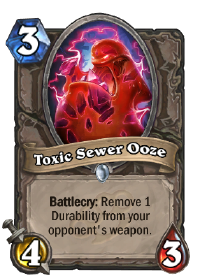 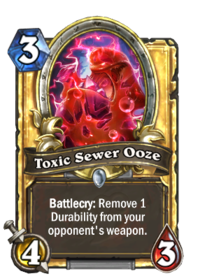 When Sergeant Sally shows up unexpectedly, DO NOT FLUSH YOUR MANA CRYSTALS DOWN THE TOILET.

Toxic Sewer Ooze is a common neutral minion card, from the Mean Streets of Gadgetzan set.

Toxic Sewer Ooze can be obtained through Mean Streets of Gadgetzan card packs, or through crafting.

Toxic Sewer Ooze is in many ways a larger version of Acidic Swamp Ooze, with suitably higher stats and mana cost but a weaker Battlecry. This minion is generally too inefficient to see regular play, but can be a tech choice against decks with multiple weapons.

Generally this minion compares quite poorly to Gluttonous Ooze, gaining 1 attack but only removing 1 durability instead of the whole weapon and losing the second effect, as well as Bloodsail Corsair, which features the same Battlecry but a much cheaper cost and the useful pirate tag.