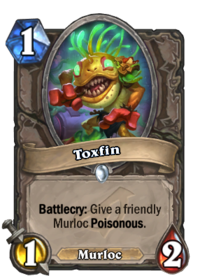 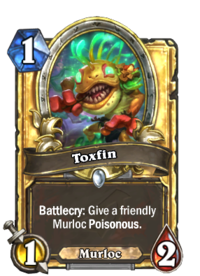 Battlecry: Give a friendly Murloc Poisonous.

I'm addicted to him, but I know that he's Toxfin.

Toxfin is a common neutral minion card, from the Rise of Shadows set.

A solid Murloc synergy minion, letting you break through a Taunt or other important minion using a Bluegill Warrior or even a simple Murloc Scout.

You can use this effect proactively to protect important Murlocs such as Underbelly Angler, Scargil, Murloc Knight, and Finja, the Flying Star. Unless your opponent has a fast answer, you can use the Poisonous Murloc to stop them from trading.