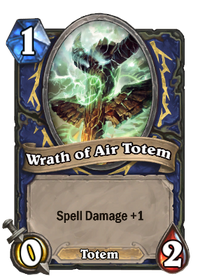 Of all the Hero Powers, Totemic Call is the most random. While it has the potential to prove quite useful, it introduces a large measure of RNG to the player's actions. While this can be fun, it can also prove frustrating, and unreliable. Making the most of Totemic Call requires the ability to predict the possible outcomes of using it, and improvise effectively in response to which minion is summoned.

Totemic Call is a great dump for shamans' spare mana. The 'lucky dip' nature of this Hero Power makes it ideal for non-critical expenditure. It is most similar to the paladin's Reinforce, but offers a far wider range of strategic uses as well as less reliably combat-usable minions.

The one-of-each-totem limit generally prevents players from acquiring multiple instances of a given totem, but also allows players some degree of predictive ability when anticipating the results of using Totemic Call; players who already have a Searing Totem and Stoneclaw Totem active have a 50% of gaining a Healing Totem, and a 50% chance of gaining a Wrath of Air Totem. This can be useful when calculating the odds of obtaining the desired totem.

Strategically, players can preferentially preserve existing totems in order to increase the odds of summoning a different totem next turn. Even within a turn, a player might choose to use Totemic Call prior to trading a totem against an enemy minion, in order to increase the chances of summoning a different totem; or after trading the totem in the hopes of gaining another of the same kind.

The 25% chance of summoning Wrath of Air Totem means Totemic Call offers a slightly larger benefit for decks featuring damaging spells. Decks without any damaging spells will find this power to be a fair amount weaker. As the shaman Hero Power, this could be considered to give shamans a small nudge toward choosing an offensive spell deck.

While most of the totems have 0 Attack, effects like Flametongue Totem, Bloodlust and Defender of Argus can allow them to be used to attack and/or as Taunts.

Healing Totem is very useful when used in conjunction with several other minions. It works especially well with high-health minions, since these have more room to take damage without being destroyed entirely. Healing Totem is most useful for maintaining board control, and rewards trading cleverly with the opponent's minions.

The Totem restores health at the end of your turn. Since this takes places before your opponent has the chance to act, its healing can be taken into account when planning attacks.

Searing Totem can be useful for poking down weak minions or strong injured minions for no card loss. This outcome of Totemic Call is very similar to the paladin Hero Power Reinforce.

Searing Totem is the only one of the totems that can be used to attack (without improvement from another effect), but is also the weakest.

Stoneclaw Totem is a useful Taunt minion. While it cannot attack, its 2 Health provides good protection against weak attackers, and wastes a valuable round for stronger minions.

Wrath of Air Totem has good synergy with shaman damage spells such as Crackle and Lava Shock, and especially area of effect spells like Forked Lightning and Lightning Storm. Be aware that its Spell Damage bonus may cause it to instantly become the focus of your opponent's attacks. While players with damaging spell cards may wish to protect it from their opponents' attacks with a Taunt, the Totem can itself be useful as a "soft taunt", attracting attacks from opponents fearing an area of effect ability on your next turn. Players not focusing on spell attacks may therefore wish to leave it unprotected, wasting their opponent's efforts.

When playing against Wrath of Air Totem, it is important to assess just how significant its presence is. Unless the shaman is planning on making use of the Spell Damage bonus the next turn, spending an attack removing it may be a waste of potential damage to the enemy hero.