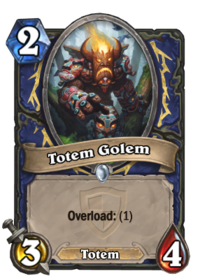 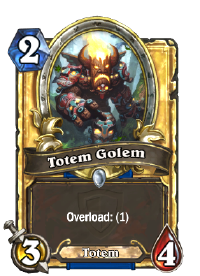 What happens when you glue a buncha totems together.

Totem Golem is a common shaman minion card, from the Grand Tournament set.

Totem Golem can be obtained through The Grand Tournament card packs, or through crafting.

Totem Golem has strong stats for its cost, similar to that of Spider Tank. Many classes struggle to deal four damage on turn two, or turn three - many common means of dealing four damage, such as Death's Bite, or Fireball do not come into play at all until Turn 4, allowing two or more attacks with Totem Golem. Similarly, Totem Golem can kill at least two other low-cost minions at the time of playing it, which can, alongside a Healing Totem, or other source of healing, provide incredible value for a low-cost minion, potentially allowing many trades with this minion.

Totem Golem works well as a follow-up to Tunnel Trogg, granting the Trogg +1 Attack which essentially nullifies this minion's tempo loss on the next turn.

The Totem Golem is original to Hearthstone. While its origins are unknown, it appears to be based upon tauren totems, given the horns and face, and the many other faces found upon its body, which resemble those on tauren totem poles. 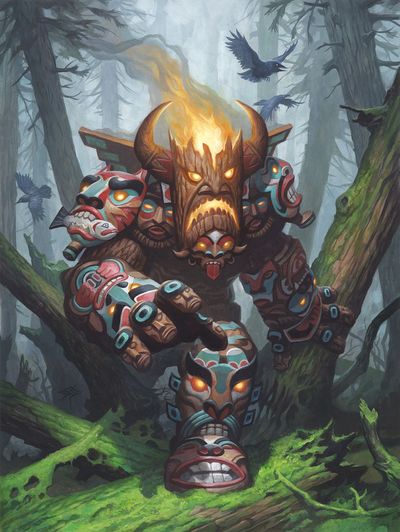