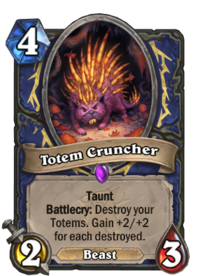 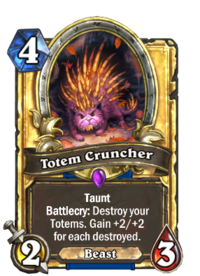 Taunt
Battlecry: Destroy your Totems. Gain +2/+2 for each destroyed.

Totem Cruncher is an epic shaman minion card, from the The Witchwood set.

This card fits the Totem Shaman archetype, designed to flood the board with totems then playing Totem Cruncher to remove them and gain a healthy stat boost. With more than one totem destroyed, this card becomes more powerful than a Chillwind Yeti. Consider using cards like Primal Talismans, which can be used on a board full of token minions to generate a lot of totems. You may also consider an even-only deck using Genn Greymane, reducing the cost of your hero power allowing you to more consistently keep the board full of totems.

Totem Cruncher appears to be a porcupine.

Porcupines, also known as hedgehogs or quillrats, are huge, quilled rodents found on Pandaria, making their first appearance with the World of Warcraft: Mists of Pandaria expansion.

Porcupine quills are sometimes used for ornamental purposes, and can be sold for a good price. Many believe that the quillrat is able to shoot its spines at aggressors. Although the wounds caused by the young quillrat are seldom fatal, most predators seek easier prey.